President Trump in a July phone call repeatedly pressured the president of Ukraine to investigate Democratic presidential candidate Joe Biden’s son, urging Volodymyr Zelensky about eight times to work with Rudy Giuliani, his personal lawyer, on a probe, according to people familiar with the matter.
https://www.wsj.com/articles/trump-defends-conversation-with-ukraine-leader-11568993176?mod=mhp
F

The corruption is disgusting.

The Right is always right

That's what this whole nothingburger was about? Protecting Crazy Joe's criminal son from potential prosecution? ROFL

Supporting Member
Trump is doing with the Ukraine what he did with Russia......to seek/accept foreign help in the 2020 election and to hurt his opponent.

1. Does Trump know it's unethical, wrong, and even illegal to do that or is he too much of a sociopath to care?
2. Or is he hoping he'll finally be impeached and thrown out of office?

Supporting Member
According to the WSJ:

The “request” from Trump wasn’t just that Zelensky open an investigation and look into things. That would not have done much to help Trump, since multiple prosecutors and investigators had already looked into the dealings of the company where Hunter Biden worked and cleared it of wrongdoing.

Instead, Trump told Zelensky to “work with [his personal lawyer Rudy] Giuliani,” apparently to ensure that Ukraine would adopt the upside-down version of the story that Giuliani has been telling.

Supporting Member
Some call it EXTORTION.

The Wall Street Journal’s source indicated that Trump did not directly mention “a provision of foreign aid” during the call. However, Trump did say that “investigations and corruption probes ... had stymied relations” between the U.S. and Ukraine. Since Trump had placed a hold on the military aid package targeted for Ukraine at that point, this would not be a difficult sentence for Zelensky to parse.

And delivering the threat in this way would be perfectly in line with the way Michael Cohen and others have described Trump’s phrasing when delivering illegal orders.
F

When will Republicans who love their country stop protecting the POS in Chief?

FakeName said:
When will Republicans who love their country stop protecting the POS in Chief?
Click to expand...

Maybe it's like the Stockholm syndrome. Trump abuses all of America and the weak authoritarians fall hard for der leader...and can't take in contrary info...or admit they've been conned.


Russia sent another resupply convoy to its army invading Ukraine in Donbas. It's the 84th such delivery of matériel since Putin's War began in 2014. The Russians again disguised the convoy as "humanitarian aid" but the trucks were not inspected by any competent authority.


If this turns out to be what the whistleblower complaint is about & it’s accurate, Trump must leave office immediately. A president can’t offer US aid to a foreign country in exchange for prosecution of a political opponent. Heaven help us if we can’t all agree on that. https://twitter.com/gregpmiller/status/1174841266774958082 …

✔ @gregpmiller
Replying to @gregpmiller and 3 others
What did Trump "promise" the leader of Ukraine? TBD, but important context: US has been holding back millions in military/intel aid for Ukraine. At same time, Giuliani has made clear Trump team wants Ukraine to pursue probe that might implicate son of Joe Biden.

FakeName said:
When will Republicans who love their country stop protecting the POS in Chief?
Click to expand...

You could try to read that biden's son has no chance of being prosecuted for anything, and then not post such obvious trump voter type lies, but maybe you just hate trying to read and would rather post irrelevant crap.

Sadly, there's too few of them.

Supporting Member
Trump's pathetic bag man Rudy Giuliani spilled the beans on his role in extorting the new Ukraine president to do what Trump did with Putin.....solicit and accept unethical and wrong help from a foreign govt....in the upcoming presidential campaign.


Trump describes whistleblower who sounded alarm about his interactions with Ukraine as "partisan." A minute later, he says, "I don't know the identity of the whistleblower."

"it was a totally appropriate conversation. It was actually a beautiful conversation," he adds. 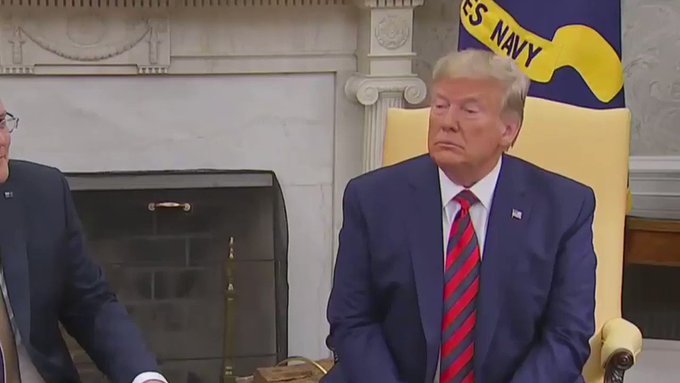 FakeName said:
President Trump in a July phone call repeatedly pressured the president of Ukraine to investigate Democratic presidential candidate Joe Biden’s son, urging Volodymyr Zelensky about eight times to work with Rudy Giuliani, his personal lawyer, on a probe, according to people familiar with the matter.
https://www.wsj.com/articles/trump-defends-conversation-with-ukraine-leader-11568993176?mod=mhp
Click to expand...

So what? Biden's son is a criminal. What's wrong with investigating criminals?
The Obama deep state has been harassing President Trump since he took office and have found nothing illegal that he has done. But you don't care about that....f**k no. You're upset because Trump wanted to have a criminal investigated.
https://www.newyorker.com/magazine/2019/07/08/will-hunter-biden-jeopardize-his-fathers-campaign

I could steal a page from the whiny trump voter playbook and threaten to tell on you for hijacking this thread about what Trump and Giuliani have done by derailing it into Biden from 2015, but i believe bringing up biden and ukraine is germane to the thread, and needs to be answered.
you are using the official state tv (FOX) version of what happened, which is bullshit. the Ukraine Prosecutor was fired because he was found guilty of corruption and fraud, and here is an article from the Irish Times giving a EU point of view of how
good this firing of this corrupt assclown was- and it had nothing to do with Biden or his son or the other red herrings trump and his official propaganda station Fox spew out to confuse the issue with total irrelevant bullshit-

The European Union has welcomed the dismissal of Ukraine’s scandal-ridden prosecutor general and called for a crackdown on corruption, even as the country’s political crisis deepened over efforts to form a new ruling coalition and appoint a new prime minister.

Ukraine’s parliament voted overwhelmingly to fire Viktor Shokin, ridding the beleaguered prosecutor’s office of a figure who is accused of blocking major cases against allies and influential figures and stymying moves to root out graft.

“This decision creates an opportunity to make a fresh start in the prosecutor general’s office. I hope that the new prosecutor general will ensure that [his] office . . . becomes independent from political influence and pressure and enjoys public trust,” said Jan Tombinski, the EU’s envoy to Ukraine.

“There is still a lack of tangible results of investigations into serious cases . . . as well as investigations of high-level officials within the prosecutor general’s office,” he added.

Mr Tombinski said the EU was also concerned about the resignation or dismissal of several “reform-oriented” prosecutors and reports that Mr Shokin’s office was investigating a “highly-respected” anti-corruption group – an obvious reference to Kiev’s Anti-Corruption Action Centre, which had fiercely criticised Mr Shokin.

In what appeared to be his last act before dismissal, Mr Shokin sacked his deputy, Davit Sakvarelidze, who had repeatedly called for his boss to be fired.

Ukrainian president Petro Poroshenko is under huge pressure to appoint a new prosecutor general with a strong anti-corruption reputation, and to back investigations into the shadowy affairs of major businessmen and politicians.

The EU and United States are demanding as much, amid a political crisis that has paralysed reforms in Ukraine and jeopardised vital funding from international lenders.

Mr Sakvarelidze, a Georgian who was also chief prosecutor in the Odessa region, said his dismissal by Mr Shokin was part of “a cleansing of people who are prepared every day to fight corruption and the old guard without compromise”.

Staff member
What keeps getting glossed over in this is Trump telling the Ukrainian to work with Giuliani. Giuliani wasn’t there on behalf of the U.S. Giuliani isn’t with the State Department,NSA,FBI,DOJ,CIA etc. He was/is Trump’s private lawyer and this was a threat to withhold US military aid funds for a completely private purpose.
You must log in or register to reply here.
Share:
Facebook Twitter Reddit Pinterest Tumblr WhatsApp Email Link