If short-sighted Johnson had the foggiest idea what he was talking about, he would know that blacks in Tulsa, and anywhere else in America, don't need to win opportunities. They already ready have MORE opportunities than whites do, by virtue of the racist Affirmative Action policies that discriminate, with whites as the victims, and blacks as the beneficiaries.

The "equity" Johnson talks about "winning", if achieved, would be a step DOWN for blacks, since currently (and for the past 57 years), they are above whites in opportunities, of various types.

Maybe Johnson also forgot about how unemployment for blacks was the lowest in US history during the Trump administration. 8,700 "Opportunity Zones" were created by Trump, giving $$$ to businesses to start up in distressed communities (thereby creating jobs), and Trump got mucho $$$$$$$ to black colleges, neglected previously by Obama. He signed legislation to increase federal funding for HBCUs by a record 17 %. That was the highest ever done. The FUTURE Act will permanently provide more than $250 million a year to the nation's historically black universities, along with dozens of other institutions that serve large shares of minority students. In addition, Trump signed EO 13779, which established ‘The White House Initiative to Promote Excellence and Innovation at Historically Black Colleges and Universities.

If Johnson really wanted to help black people in this community, instead wasting money on dopey BLM signs, he should have worked to get Trump re-elected. 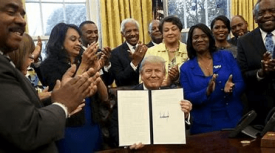 Under Trump, median wage was highest in US history - forgot to put that in the OP.

protectionist said:
Under Trump, median wage was highest in US history - forgot to put that in the OP.
Click to expand...

How quickly they forget

Bernard_Fokke said:
How quickly they forget
Click to expand...