reason10 said:
It's about a doctor wanting Joe Biden to take a cognitive test.
Click to expand...

The "doctor" is a troll.

Dawg said:
All one needs do is watch Biden speak w/out teleprompter
Click to expand...

so you never watched Trump without one?

The Right is always right

bdtex said:
The "doctor" is a troll.
Click to expand... 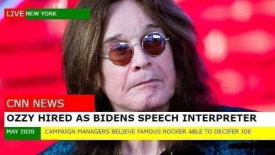 Dawg said:
All one needs do is watch Biden speak w/out teleprompter
Click to expand...

On gay marriage
"It's like in golf... A lot of people - I don't want this to sound trivial - but a lot of people are switching to these really long putters, very unattractive... it's weird. You see these great players with these really long putters, because they can't sink three-footers anymore. And, I hate it. I am a traditionalist. I have so many fabulous friends who happen to be gay, but I am a traditionalist."

On health care
"The U.S. cannot allow EBOLA-infected people back. People that go to far away places to help out are great - but must suffer the consequences!"

The Big Idea with Donny Deutsch, 2006

Supporting Member
Test not needed to prove it 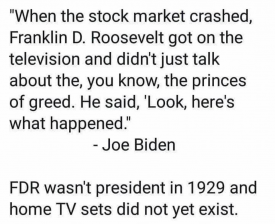 Dawg said:
Test not needed to prove it