The racist hypocrites of the New York City Council who removed a statue of the 3rd President of the United States, Thomas Jefferson, now need to remove their racist Black, Latino and Asian Caucus, which EXCLUDES whites.

Either that, or start up a White Caucus. A long as non-white races are allowed to have a caucus (whatever that means), and whites are not, these hypocrites have no business removing any statues, or making any decisions whatsover, based on race.

According to I. Daneek Miller, the co-chairman of the City Council's Black, Latino and Asian Caucus, the statue was banished from the chamber because it fails to represent contemporary values. So in other words, Miller's idea of "contemporary values" is to racially discriminate, as long as non-whites are represented, and whites are unrepresented. 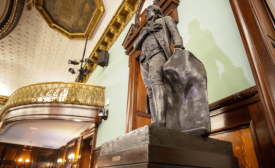 Notice how Democrats are just flocking in here ? LOL.