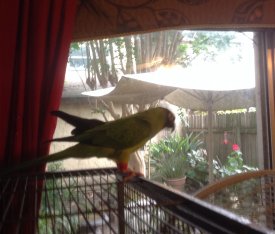 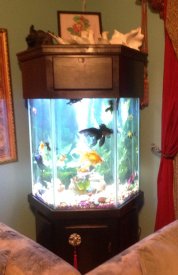 Love it. I'm willing to bet that aquarium with the lights low and a nice adult beverage and some smooth easy jazz is relaxing.
I also see you have hummers that visit you.
L

Constitutional Sheepdog said:
Love it. I'm willing to bet that aquarium with the lights low and a nice adult beverage and some smooth easy jazz is relaxing.
I also see you have hummers that visit you.
Click to expand...

You mean like this? There is still romance at the Hernandez house even after more than 20 years 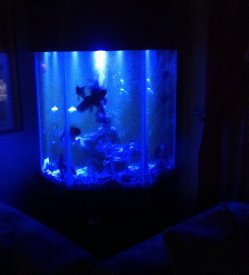 lupehernandezdepedajack said:
You mean like this? There is still romance at the Hernandez house even after more than 20 yearsView attachment 25374
Click to expand...

OH yell I can hear the music now

lupehernandezdepedajack said:
And a bottle of a good Cab.
Click to expand... 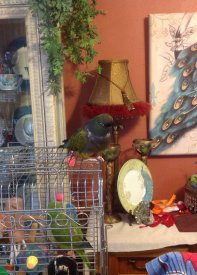 lupehernandezdepedajack said:
Just remember a 90 gallon tank takes a lot of work to keep the fish healthy and looking crystal clear we have often thought of getting rid of it over the last 5 years but we got the Led light set for ourselves for Christmas they ain't cheap and we have been inspired by it to keep the aquarium up
Click to expand...

I know that's why I will never own an aquarium. I wished I have always wanted one. I have thought about getting one of those fake ones
L 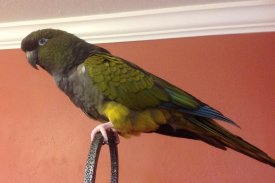 Valentino alone he is our biggest most talkative and most expensive he is a Patagonian Conure. More birds to follow later
Last edited: Jun 1, 2014

lupehernandezdepedajack said:
If you live in a big city and have the cash there is probably a few fish stores that will set you up with a nice one and do the maintenance on it
Click to expand...

We have plenty of pet specialty stores around here. I do good with plants and animals outside of a water bowl, but I doubt fish would make it with me.

lupehernandezdepedajack said:
About humming birds. They are gone now but come back in late August until mid October getting ready for their trip way down south. They are fun to watch but are really mean to each other
Click to expand...

Where are you located central America? We have your birds and we want 10 million for their return.
L

Constitutional Sheepdog said:
Where are you located central America? We have your birds and we want 10 million for their return.
Click to expand...

Valentino the Patagonian is native to Argentina and Chile and recently there has been concern about them they breed well n captivity and I think loss of habitat is their main danger.
I also have a white capped pionus native to Peru I do not know about them to say one way or another. As I get some better shots of the other birds I will add them to the thread
G 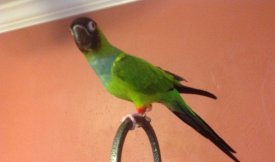 What kind of stuff do they say?
L 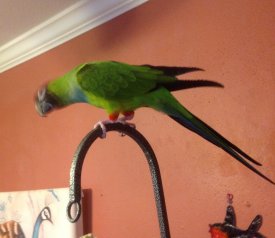 gigi said:
What kind of stuff do they say?
Click to expand...

Lots of stuff
Valentino says whatca doin? Kiss kiss, good, come here, he says hello when the phone rings
Blue a quaker sings rock a bye baby all the way to when the wind blows. He also says "you made a mess" when you sweep around his cage. I am trying to get a good shot of him but he doesn't want to pose.
Luca calls my son by name and when mrs H. Is getting ready to go out he often makes a cat call whistle sound.
Bo doesn't talk he sits on me every morning for about an hour an rubs his head on my chin while I drink coffee. He is doing that right now.
Sienna, a white capped Pionus who also won't pose for me only says pretty bird.
So far I haven't been able to teach the fish to say anything.
I will add the other birds when I get good shots of them
Last edited: Jun 3, 2014

I have been enjoying this thread, Lupe.
L

Jen said:
I have been enjoying this thread, Lupe.
Click to expand...

Thanks Jen,
There are 4 other birds I will add as I get good shots of them
L

This is Sienna she is mean and not friendly. Her first years were spent in neglect and she is blind in one eye because of it. She bites hard and her only redemption is she looks really pretty when she flies, the other birds are mean to her. If I could find someone that would care for her I would give her to them but my heart tells me no one would care for her like we do. Even though she is mean I think she is happy at Lupe's house. She is a white capped pionus native to Peru. 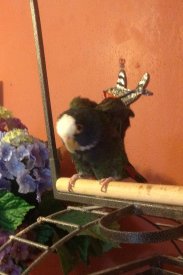 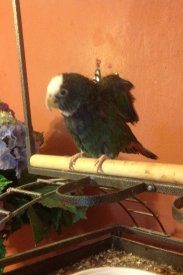