No, Gabby Petito ISNT getting “too much media attention” because she's white . . .

Spamature said:
You said Hispanics cheated you by voting illegally

Then you said in Blacks in Black precincts they cheated you in various ways, from hiding ballots to manufacturing fake ballots to importing ballots from other states and countries.

You people said all this over the past 10 months, and now you are going to try and pretend you didn't ?

Nobody said Hispanics cheated by voting illegally. Do you have a problem with these brown people? That wouldn't be surprising, since your party thinks they are inferior. 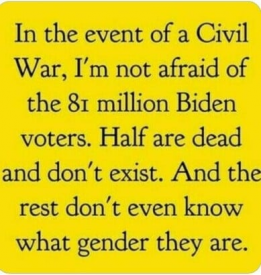 Drumcollie said:
Is that why Biden whipped black Haitians and deported them?

BTW don't answer to me, but to GOD.
Click to expand...

There was no whipping. That was a media lie.

RickWA said:
Agreed (and I always ignore these sensationalized “Stone Phillips-style” dramas). Of course it’s a tragedy for the young lady, but the media sensation does nothing to remedy that.
Click to expand...

They seem to be using it as an opportunity to boost their own ratings while simultaneously complaining that they are doing it.
E

reason10 said:
Nobody said Hispanics cheated by voting illegally. Do you have a problem with these brown people? That wouldn't be surprising, since your party thinks they are inferior.

So your position is that there were no illegal votes cast by Hispanic people in the 2020 presidential election?

write on said:
We had better wake up!
Click to expand...

Drumcollie said:
Says the who thinks a bad taste is a sound.
Click to expand...

Think about it and then get back to me.

reason10 said:
The media IS reporting the Gabby Petito murder more than the average black and brown murders which take place in blue states.

Republicans have a problem with black and brown children getting murdered every week in blue state and we would like to see more media coverage. Problem is, the media supports the left politicians who run blue state large cities.

Florida is a very successful red state, with the best schools in the country, no state income tax, a balanced budget, etc. And because things run so well in the Sunshine State, the media has had to create almost an idiotic reality show out of the Gabby Petito murder.

are just as dead as this one
View attachment 65988

but they are the wrong color for the racist media and the racist Democratic Party.

Those black kids just aren't worth any consideration. To Democrats, those kids are just animals.

Republicans are the ones who got those kids out of the cotton fields and got them the right to vote, and overturned Jim Crow.

The racism, today as in 100 years ago, has always been on the left. And that will not change.

Joe is as racist a president as Obama. Whoever voted for him is also a racist.
Click to expand...

Here let this man explain it to you.