Those two Luciferian entities (Trump & Israel) are going to lead us all to the Gates of Hell before it is over. First, Trump turns over the whole of Jerusalem to the Israelis, so that their Pharisaic Priests can build their Third Temple on Temple Mount, next to shrines the Islamic World considers sacred. Now, Trump has given Israel the Green Light to annex large chunks of the West Bank, completely destroying any chance of the Palestinians having a state of their own. Henceforth, the Palestinians can only exist at the sufferance, and mercy, of the Israelis. Many will have no choice but to pack up and to emigrate, preferring to live elsewhere than to endure humiliation and slavery at the hands of a voracious and Godless entity.

Israel's Orthodox Priests now have a powerful influence within the new coalition government of Benjamin Netanyahu, so we can expect action soon on the annexation process.

It should be clear to anyone with half a brain by now that Trump is in the White House, not to make America great again, but to make Israel great. Trump will go down in history as the man who brought on World War Three. He will also be remembered as a traitor, liar, and deceiver of the worst order; just the type of politician the Israelis prefer in the White House. And who is running against him in November? Why, no less than self-confessed Zionist and traitor, Joe Biden; the man who, in collaboration with Israeli agent, Michael Chertoff, wrote up the Patriot Act some five years before the 9/11 tragedy took place, killing 2900 U.S. citizens.

Poor Amerika; there is to be no respite for you. You have made no effort at redress; rather, you have remained silent in the face of horrible acts by your government. Your psychotic rulers, the Lords of Freemasonry, read your silence as consent, and so carry on with their evil agenda to destroy the America of the Founding Fathers, and to reduce the population of the planet by three-quarters. You can read their intent regarding population control, etched in several languages, on the Georgia Guidestones. It has been there, in your face, for decades. This is not to mention the many scams perpetrated on you by these self-same criminals, to deprive you of wealth and liberty, yet you do nothing. Read the short article below:

Jordan Threatens War With Israel Over Trump Plan
Signs of the Last Days® Ministry May 18, 2020General 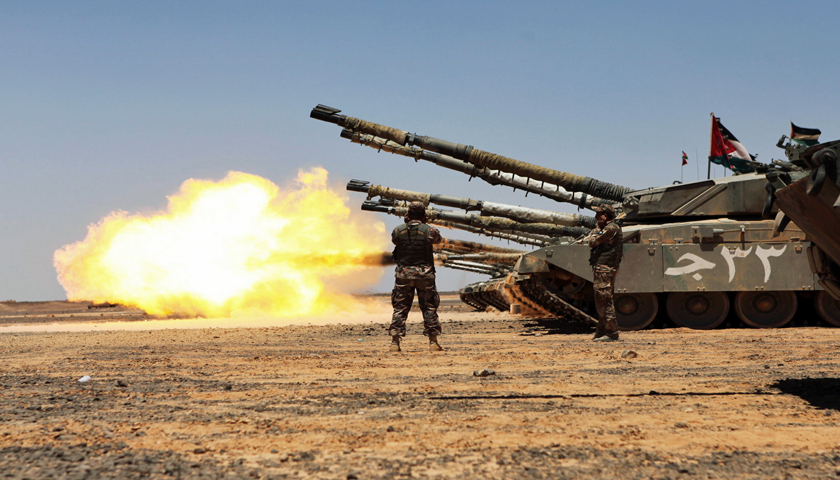 Jordan’s King Abdullah is warning of “massive conflict” between his country and Israel if the Jewish state proceeds with annexing the West Bank as detailed in US President Trump’s Middle East plan.

Unveiled in January, the controversial Trump plan gives a green light for Israel to annex about a third of the occupied West Bank, leaving the Palestinians with heavily conditioned statehood in scattered territorial enclaves surrounded by Israel.

Jordan’s king warned Israel of a “massive conflict” if it proceeds with its plans to annex large parts of the occupied West Bank, as European Union foreign ministers agreed to step up diplomatic efforts to try to head off such a move.

The EU has already rejected Trump’s plan. And Jordan has been lobbying the EU to take steps to make sure the Israeli annexation does not happen.
Benjamin Netanyahu has entered into an agreement to form a unity government in Israel driven to happen by the coronavirus pandemic after more than a year of political deadlock.

This agreement has him initially as prime minister of Israel, which has moved Israel’s government a step closer to possibly taking action on the annexation.
Netanyahu and his rival-turned-partner in the unity government, Benny Gantz, have scheduled the swearing-in of their new cabinet and government.
And their coalition agreement says the Israeli government can, from July 1, begin considering implementing the West Bank annexations detailed in Trump’s Middle East plan.

Jordan is one of only two Arab states to have signed a peace treaty with Israel. But Jordan views Israel now promising to annex Jewish settlements and the Jordan Valley, could spell the end of the long-stalled peace process by making it virtually impossible to establish a viable Palestinian state.
In a video conference, EU foreign ministers reaffirmed their support for a two-state solution and opposition to any annexation by Israel.
The EU ministers also agreed to ramp up diplomatic efforts in the coming days with Israel, the Palestinians, the US and Arab countries. As the EU begins to step out on its own to lead on the issue in the region.

Israel seized East Jerusalem, the West Bank and the Gaza Strip in the 1967 war. But the Palestinians want all three to form a future state.
The EU bloc and the U.N. have long been committed to a two-state solution based on the 1967 lines, with the possibility of mutually agreed land-swaps. And their view is that an Israeli annexation would be a violation of international law.

And now Jordan’s King Abdullah has come out and essentially put his relationship with Israel and the peace treaty with Israel on the line.
Basically saying the end of any prospect of a Palestinian state poses not just a strategic threat, but an existential threat to the monarchy in Jordan, which the king says would mean a “massive conflict.”
Last edited: May 23, 2020
You must log in or register to reply here.
Share:
Facebook Twitter Reddit Pinterest Tumblr WhatsApp Email Link