Staff member
Visited the Sabine Pass Battleground State Park on Saturday. Up until then,about all I knew of the battle is what I read on the Civil War Trust site. The park is an hour and a half drive from where I live. The town of Sabine Pass wasn't much on 9/8/1863 and still isn't. The park isn't very big. It took about an hour and a half to read and see everything there was.

Learned some things. It was amazing that someone knew a fort needed to be built on that site and how to design and place it. The part of the banks of Sabine Pass where the fort stood have already eroded away. The river was actually narrower there at the time than it is now. They have a scale model of Fort Griffin there. The actual fort was 10 feet High and 370 feet long. It had 6 cannons. The fort was built by 500 slaves. The heat and humidity were brutal there on Saturday. Bet it was the same in 1863.

You can't really appreciate what it must've been like at the battle without visiting the park and looking at the layout and at the river. A lot of the wounded Union prisoners were horribly burned by hot water and steam when their ships were hit by cannon fire from the fort. The garrison and local citizens weren't equipped to handle them either. I definitely had the feeling of being on hallowed ground.

Took some notes while I was there. Wanna read up on some other things about the battle and participants. It was a good trip. Great way to spend a Saturday.

Built by slaves? It should be torn down.

marvin martian said:
Built by slaves? It should be torn down.
Click to expand...

It's not there anymore. The section of the bank on the Texas side of the Sabine River where the fort stood has eroded away. The site where the original fort stood is under water.

The Sage of Main Street said:
Slavery was the only way to get that lazy race to work. They've been mooching and screwing off ever since the South lost the Civil War.
Click to expand...

Perhaps you should start your own thread.
T

The Sage of Main Street

bdtex said:
Perhaps you should start your own thread.
Click to expand...

On Main Street, We Have a Different Perspective

So only Rainbow Warriors can go off-topic? As you know, I was just responding to mm trying to make this all about race.

It was much like the First Battle of Wake Island on December 11, 1941, where, to put it in New Age language, racist Marines killed Japanese just because of the color of their skin.

What does that have to do with anything in this thread? 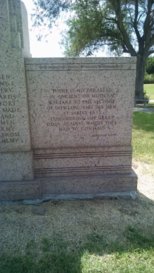 marvin martian said:
Why are you perpetuating the words of slave-king Jefferson Davis? It's very racist...
Click to expand...

The inscription on the monument was words said by Davis regarding the Confederate soldiers at Fort Griffin who were engaged at the Battle Of Sabine Pass.
Last edited: Jul 28, 2015

bdtex said:
What does that have to do with anything in this thread?

It seems pretty obvious that this monument was r&r'd. It would be interesting to find out who did it.

removed and restored (or rhehab'd)

fairsheet said:
removed and restored (or rhehab'd)
Click to expand...

It's not in the picture I posted but at the base of the monument in it's center it says that the monument was erected by the State Of Texas in 1936. It's about 20-30 yards from the banks of the Sabine River and totally exposed to the worst of Texas Gulf Coast weather.

Staff member
Can't believe I missed this. One week ago and 152 years ago today. Good time to post this pic in the honor of Union soldiers killed or missing in action there: 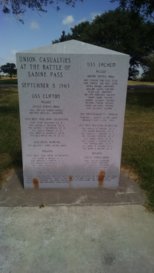 I went over and worked out of Sabine Pass one summer as a teenager for some family as a deck hand (just before leaving for the USAF).

MrMike said:
I went over and worked out of Sabine Pass one summer as a teenager for some family as a deck hand (just before leaving for the USAF).
Click to expand...

Crew boats servicing rigs (we usually ran out of Sabine Pass or Cameron) on contract to Shell Oil. We would go out, drop off stuff, hang out and fish. Two weeks on and a week off. I think I made $65 a day which was huge then.

(I had my share of time on Shrimp boats growing up as a kid - harder work).

MrMike said:
Crew boats servicing rigs (we usually ran out of Sabine Pass or Cameron) on contract to Shell Oil.
Click to expand...

Ok. Didn't know it worked that way. When you said working for a family as a deck hand,I immediately thought shrimp boat or charter fishing boat.

bdtex said:
Ok. Didn't know it worked that way. When you said working for a family as a deck hand,I immediately thought shrimp boat or charter fishing boat.
Click to expand...

My uncle was the Captain.

Staff member
Visited the Museum Of The Confederacy in Richmond or Friday 1/8/2016. Took lots of pics. Especially like these 2. Ladies in Houston had medals made and given to the Davis Guards,the Confederate troops at the Battle Of Sabine Pass on September 8,1863. Jefferson Davis got one too. Don't recall whether he got it from the ladies or whether one of the troops gave it to him. Jeff Davis had his on his person when he was captured and one of his Union captors took it from him. He never got it back. Very rare artifact today. 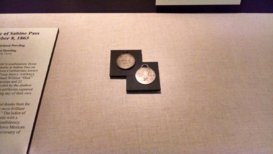 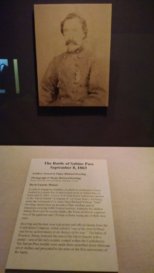 The last sentence on pic 2 says: "The Sabine Pass medals were made from smoothed down Mexican silver dollars and presented to the men on the first anniversary of the battle."

Staff member
Battle Anniversary bump. That will always be a special day for me. First "battlefield" visit for me. It had been a little over an hour from where I lived for most of my life and I didn't even know it was there. Not exactly a major battle by Civil War standards,but there was not a lotta good news for the Confederacy in the latter half of 1863 and Sabine Pass was used as a moral booster, even if only temporary.

Didn't have a good camera that day and I was a total novice at battlefield photography. It was sunny and hot too. Wish I could go there today. I don't imagine getting there would be easy today. That area was hard hit by round 2 of Harvey.